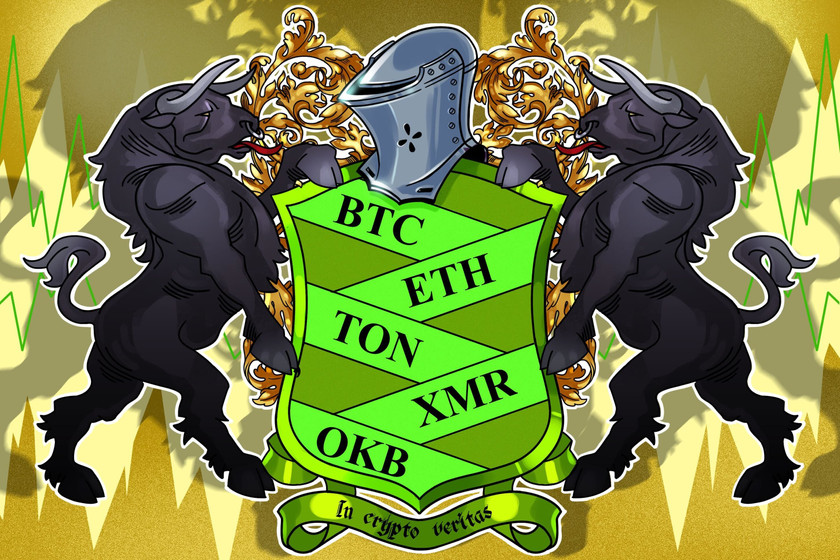 Bitcoin’s volatility could soon pick up and that may boost buying interest in ETH, TON, XMR, and OKB.

Cryptocurrency markets lack any signs of volatility going into the year-end holiday season. This suggests that both the bulls and the bears are playing it safe and are not waging large bets due to the uncertainty regarding the next directional move. This indecisive phase is unlikely to continue for long because periods of low volatility are generally followed by an increase in volatility.

Willy Woo, creator of on-chain analytics resource Woobull, anticipates that the duration of the current bear market may “be longer than 2018 but shorter than 2015.”

The crypto winter has resulted in a loss of more than $116 billion to the personal equity of 17 investors and founders in the cryptocurrency space, according to estimates by Forbes. The carnage has been so severe that the names of 10 investors were removed from the crypto billionaire list.

Could the bear market deepen further or is it showing signs of starting a relief rally? Let’s look at the charts of Bitcoin (BTC) and select altcoins to find out.

Bitcoin has been trading in a tight range near the 20-day exponential moving average ($16,929) for the past few days. This indicates that the bears are defending the level but the bulls have not given up yet.

This period of calm is unlikely to continue for long and the BTC/USDT pair may soon witness a range expansion. Generally, it is difficult to predict the direction of the breakout, hence it is better to wait for the pair to make a decisive move before initiating directional bets.

If the price breaks above the moving averages, the likelihood of a rally to the overhead resistance at $18,388 increases. This level may again act as a major roadblock but if the bulls force their way through, the momentum could pick up and the pair could rally to $20,000.

On the way down, a break below $16,256 could signal that bears are in control. The sellers will then attempt to sink the pair to the vital support at $15,476.

Both moving averages on the 4-hour chart have flattened out and the relative strength index (RSI) is just below the center. This suggests a range-bound action in the near term. The boundaries of the range could be $17,061 on the upside and $16,256 on the downside.

A break above $17,061 will indicate that the bulls have come out on top and that could start a short-term up-move. On the other hand, a slump below $16,256 will suggest that the bears have strengthened their hold.

Ether (ETH) has been clinging to the 20-day EMA ($1,228) for the past few days. This suggests that traders expect a break above this overhead resistance.

The 20-day EMA is flattening out and the RSI is just below the midpoint, suggesting equilibrium between buyers and sellers. If bulls thrust the price above the moving averages, the ETH/USDT pair could attract further buying. The pair could then rally to $1,352 and later to the downtrend line. This level could again act as a formidable resistance.

On the contrary, if the price fails to break above the moving averages, several short-term traders may sell aggressively. That could pull the price to the strong support at $1,150. If this level gives way, a head and shoulders pattern may complete. That could clear the path for a potential drop to $1,075 and then $948.

Toncoin (TON) has been consolidating in an uptrend for the past few days. Although the bears have stalled the up-move at $2.90, a minor positive is that the bulls have not given up much ground. This suggests buying on dips.

The bears are likely to have other plans as they will try to yank the price below the 20-day EMA and strengthen their position. There is a minor support at $2.15 but if that fails to hold, the pair may plummet to the 50-day SMA ($1.91).

The pair has formed a symmetrical triangle on the 4-hour chart. This indicates indecision between the bulls and the bears. The flattish moving averages and the RSI near the midpoint also do not give a clear advantage to anyone.

The first sign of strength will be a break and close above the resistance line of the triangle. That could start a rally to $2.90. If this level is scaled, the up-move could reach the pattern target of $3.24.

If the price turns down from the 50-SMA or the resistance line of the triangle, it will suggest that the pair may extend its stay inside the triangle. A break below the support line could indicate that the bears are back in control.

Related: The 5 most important regulatory developments for crypto in 2022

Monero (XMR) has failed to rise above the resistance line of the falling wedge pattern in the past few days but a positive sign is that the bulls are trying to hold the price above the 50-day SMA ($140).

The moving averages have flattened out and the RSI is near the center. This indicates a balance between supply and demand. If the price breaks above the 20-day EMA ($144), buyers will try to gain the upper hand by pushing the XMR/USDT pair above the wedge. If that happens, the pair could rally to $174. A break above this level could signal a potential trend change.

On the other hand, if the price slumps below $138, the advantage could tilt in favor of the bears. The pair could then plummet to $125.

The pair rebounded off the strong support at $138.50 and the bulls are trying to push the price above the moving averages. If they succeed, the pair could rise to the downtrend line where the bears may again mount a strong defense.

If the price turns lower from the downtrend line, the bears will try to pull the pair to $138.50. This is an important level to keep an eye on in the near term because a break below it could complete a descending triangle pattern. The pair could then tumble to $132 and thereafter to the pattern target of $124.

On the upside, a break above the downtrend line could invalidate the bearish setup and clear the path for a possible rally to $153.

Centralized Cryptocurrency exchanges have been in the eye of the storm since the collapse of FTX but OKB (OKB) is close to completing a bullish reversal pattern. That is the reason for its selection to the list.

The OKB/USDT pair has formed a large inverse head and shoulders pattern, which will complete on a break and close above $23.22. Both moving averages are sloping up and the RSI is in the positive territory, indicating the path of least resistance is to the upside.

If the price rises above the psychological level of $25, the pair could start a new up-move to $28 and then $31. The pattern target of the reversal formation is $36. This positive view could invalidate if the price turns down from the current level and plummets below the moving averages. The pair could then drop to $17.

The pair has formed an ascending triangle pattern on the 4-hour chart. This bullish setup will complete on a break and close above $24.15. If that happens, the pair could start a new up-move toward the pattern target of $31.

Alternatively, if the price turns down and breaks below the triangle, it will invalidate the bullish setup. That could trigger stops of aggressive buyers who may have taken long positions in anticipation of a breakout. The pair could then slide to $20.