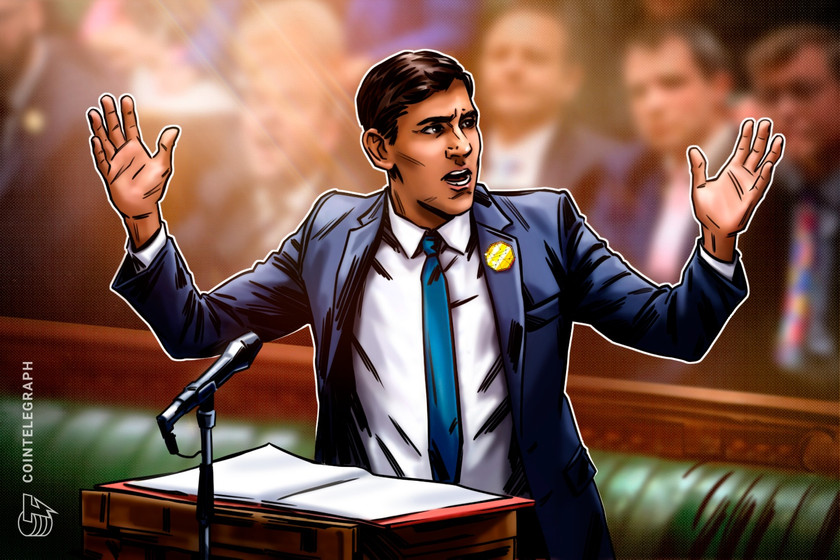 Cryptocurrency fans have a lot to look forward to with the new prime minister, who has a track record of being highly positive about the industry.

A former investment banker turned savvy politician, Rishi Sunak has had an incredibly prolific career in just a short period of time. At only 42, he has served as a member of the United Kingdom’s Parliament, chief secretary to the treasury and chancellor of the exchequer — and now, he’s starting his tenure as prime minister.

As the youngest PM to take office in the U.K. in more than 200 years, Sunak has something else in common with his millennial peers: He is a crypto enthusiast. In fact, as a recent Bank of America survey found, “Younger investors are choosing to allocate significantly more of their portfolios to crypto” than their older counterparts. Additionally, those in the 21–42 age bracket are “more likely to believe crypto offers the greatest opportunities for growth” and allocate an average of 15% of their portfolios to crypto investments, compared with the 2% invested by the over-42s.

The difference is, of course, that Sunak doesn’t just keep his soft spot for cryptocurrencies to himself. Unlike many of his peers, he is actually capable of advancing the industry in entirely new, exciting ways. He can propose legislation, issue regulations and push through new ideas. He can pave the way for the migration from Web2 to Web3 — which will largely be built on technologies like cryptocurrencies but will also include nonfungible tokens (NFTs), blockchain, artificial intelligence and the advent of the metaverse, among others — and potentially make a Web3 hub out of the U.K. in no time.

Related: The feds are coming for the metaverse, from Axie Infinity to Bored Apes

Make no mistake: This is not pure speculation — he said so himself.

“It’s my ambition to make the U.K. a global hub for crypto-asset technology,” Sunak said as chancellor of the exchequer, highlighting the need to “ensure firms can invest, innovate and scale up in this country.”

As a finance minister serving during former PM Boris Johnson, the Stanford graduate pushed through several crypto-related initiatives as part of an overall agenda aimed at normalizing and advancing the crypto ecosystem in the United Kingdom.

Chancellor @RishiSunak has asked @RoyalMintUK to create an NFT to be issued by the summer.

This decision shows the the forward-looking approach we are determined to take towards cryptoassets in the UK. pic.twitter.com/cd0tiailBK

In 2020, Sunak announced his intention to prioritize financial technology, such as central bank digital currencies (CBDCs) and stablecoins, in order to allow the country to keep up with the times, or, in his words, “ensure the UK financial services industry is always at the forefront of technology and innovation.”

In 2021, he identified the need for pioneering reforms “to support the safe adoption of cryptoassets and stablecoins” and went as far as proposing that the Bank of England explore the possibility of a CBDC. Just this spring, he ordered the Royal Mint to launch a government-backed NFT aimed at showcasing the 1,136-year-old institution’s “forward-looking approach,” and he introduced legislation to “see stablecoins recognised as a valid form of payment in the UK.”

He also — and, perhaps, most importantly — helped formulate the Financial Services and Markets Bill, which the country moved forward with this month. The suggested bill, which proposes “a range of measures to maintain and enhance the U.K.’s position as a global leader in financial services,” is the first step, and a crucial one at that, toward greater clarity around technologies like cryptocurrencies and blockchain and would allow their development to further advance and their hold to strengthen.

If we were to venture a guess as to what the prime minister’s first steps might look like over the coming months, crypto regulation would be a good, if not even safe, bet. “By regulating effectively,” Sunak said, “we can give [the businesses of tomorrow] the confidence they need to think and invest long-term.”

On the heels of the European Parliament Committee finally approving the much-discussed text for the Markets in Crypto-Assets framework and the White House publishing what it described as the “first-ever comprehensive framework for responsible development of digital assets,” seeing the U.K. follow right behind would be a really great sign for the industry as a whole. By 2023, we could be looking at an entirely different global crypto landscape — one that’s more advanced, more regulated, more widespread and more expansive. And that can only ever be a positive thing.

We can look forward to seeing how the youngest PM in British history treats the “youngest” innovation of our time. I wish him good luck, bullish markets and a long journey ahead. Just hodl, Rishi.

Lars Seier Christensen is the founder and chairman of Concordium, a layer-1 blockchain.