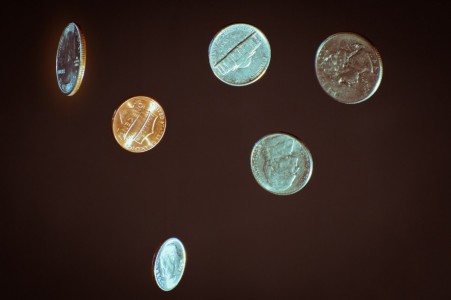 Most cryptocurrencies, including Bitcoin and Ethereum, have prices based on supply and demand. However, some cryptocurrencies are instead pegged to the price of existing assets such as fiat currencies, stocks, or other crypto assets.

This allows value that originates outside of the cryptocurrency market to be handled in blockchain transactions. Here are five types of price-pegged tokens.

Centralized reserve stablecoins are one of the most common types of price-pegged tokens. In this case, a company creates a reserve containing fiat currency—typically the U.S. dollar—then issues a supply of circulating stablecoins.

This approach is used by Tether’s USDT, Coinbase’s USDC, and Paxos’ USDP, as well as many other popular stablecoins pegged to the U.S. dollar.

Other stablecoins may be pegged to other fiat currencies like the euro, British pound, or the Japanese yen. Some reserve-backed stablecoins may also hold financial assets such as bonds and treasury bills and alongside their reserve of fiat currency.

Individual users deposit their own holdings as collateral, and the issuance of new stablecoin tokens is controlled via smart contracts. Because decentralized stablecoins are backed by crypto, anyone can audit the on-chain minting process.

Maker’s DAI stablecoin is one example of this approach. DAI was originally backed by an excess of Ethereum (ETH) to maintain a $1.00 value regardless of ETH’s price; it is now backed by USDC alongside Ethereum as additional protection against instability. DAI maintains its $1.00 price peg without using real U.S. dollars as backing.

Some price-pegged cryptocurrencies are tied to the value of stocks rather than fiat currencies. Synthetic tokens typically derive their price from oracles that track the value of the relevant stock, though they may also use collateral.

Synthetic assets generally cannot be redeemed for the actual underlying stock, meaning that users do not gain access to shareholder rights and dividends. Instead, they merely provide a way to invest in an asset that is pegged to a stock’s value.

In one use case, a user may deposit Bitcoin (BTC) and receive wBTC in return. Then, the user can invest wBTC through DeFi applications on the Ethereum blockchain—something that would not be possible with Bitcoin in its original form. By using wrapped assets, users may avoid the cost of exchanging BTC for ETH.

Wrapped assets almost always maintain price parity with the original deposited asset, though there may be small variations in market value at times.

Liquidity tokens are tokens granted to users who deposit their cryptocurrency in a staking pool, liquidity pool, or another similar service.

These tokens allow investors to move the value of their investment freely even if the original asset is locked in a long-term staking contract.

One example of this type of token is Lido’s staked ETH (stETH) token. Various other staking services and exchanges also issue similar tokens as well.

Though these tokens usually target the price of another token, prices may diverge significantly if they are not strictly tied to ETH’s value. For example, Lido’s stETH token lost parity with ETH this June amidst the collapse of the Terra and Luna projects.

Liquidity tokens are currently popular because Ethereum requires assets to be staked indefinitely. Depending on other assets’ approach to staking, those assets may or may not have corresponding liquidity tokens.

Why Pegged Tokens Are Necessary

Price-pegged tokens serve an important role in uniting various parts of the crypto ecosystem and the broader financial system. Stablecoins and synthetic tokens allow traditional assets to move in and out of crypto markets quickly.

Meanwhile, wrapped assets and liquidity pool tokens ensure that users can move and invest their cryptocurrency holdings when there may be no other way to do so.

Together, those tokens account for approximately 16% of the crypto market’s $964 billion market capitalization and are a valuable part of the crypto industry.