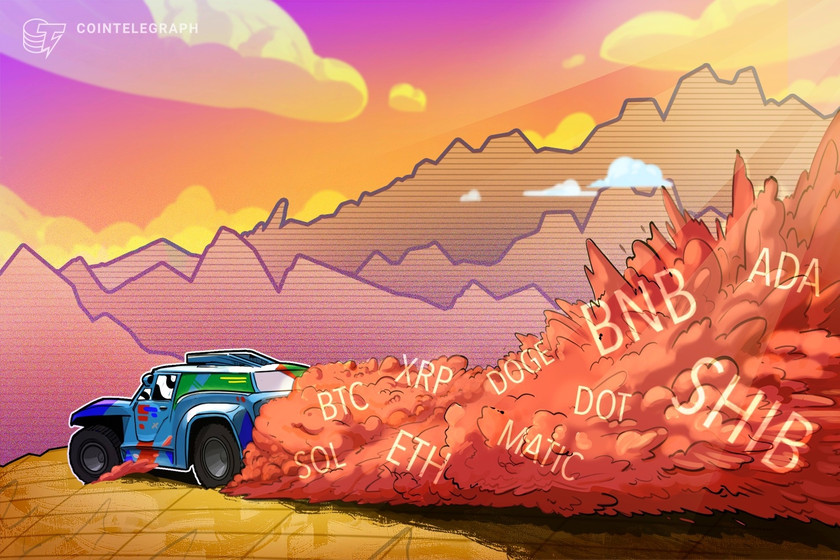 Legacy markets continue to negatively impact Bitcoin price, but a positive sign is that the bulls have not allowed BTC to retest its June low.

The United States equities markets have started the week on a weak note as investors remain unconvinced that the Federal Reserve will pull back its aggressive monetary policy. The Nasdaq Composite index fell to its lowest level since September 2020.

All eyes will be fixated on the U.S. Consumer Price Index data for September to be released on Oct. 13 as that could influence the Fed’s decision on the size of the rate hike in the next meeting in November.

Depending on how the market perceives the reading, legacy markets and the cryptocurrency markets may witness a pick-up in volatility. A minor positive for the bulls is that Bitcoin (BTC) has not tested its June lows and has outperformed the Nasdaq and the S&P 500 in the short term.

A positive trigger could start a strong recovery in Bitcoin and select altcoins. Let’s study the charts of the top 10 cryptocurrencies to determine the key resistance levels to watch out for.

Bitcoin broke below the 20-day exponential moving average (EMA) ($19,584) on Oct. 7 and then successfully defended the level between Oct. 8 to 10. The sellers are trying to strengthen their position further by pulling the price below the uptrend line.

Contrarily, if the price rebounds off the uptrend line, the bulls will try to push the pair above the moving averages and challenge the downtrend line. A break and close above this level will be the first indication that the bears may be losing their grip. The pair could then attempt a rally to $22,800.

Ether (ETH) is struggling to rise above the 20-day EMA ($1,351). This suggests that the bears are selling on rallies and will try to sink the price to the strong support at $1,220.

The gradually downsloping 20-day EMA and the relative strength index (RSI) in the negative territory indicate an advantage to bears. If the price slips below $1,220, the selling could intensify and the ETH/USDT pair may drop to the support line of the descending channel pattern.

Conversely, if the price turns up from the current level and breaks above the 20-day EMA, the pair could rise to $1,410. The bulls will have to push and sustain the price above the channel to signal a potential trend change.

BNB has been trading between $258 and $300 for the past several days. The break below the moving averages on Oct. 8 paves the way for a possible decline to the strong support at $258.

If the price rebounds off $258, it will suggest that the range-bound action may continue for some more time. The longer the time spent in the range, the stronger will be the eventual breakout from it.

The next trending move will begin on a break above $300 or a drop below $258. It is difficult to predict the direction of the breakout with certainty. Therefore, it is better to wait for the breakout to happen before taking directional bets.

The bulls tried to push XRP above the overhead resistance of $0.56 but the bears did not budge. The sellers will attempt to pull the price to the 20-day EMA ($0.47).

If buyers want to maintain the upper hand, they will have to buy the dips to the 20-day EMA. If the price rebounds off this support with strength, the likelihood of a break above $0.56 increases. The pair could then resume its uptrend and rally to $0.66.

This positive view could be invalidated if the price turns down and breaks below the 20-day EMA. The XRP/USDT pair could then decline to the breakout level of $0.41. A bounce off this support will indicate that the pair may remain stuck between $0.41 and $0.56 for some time.

Cardano (ADA) has been gradually sliding toward the vital support at $0.40. This level has held on two previous occasions; hence, the bulls are again expected to mount a strong defense at this support.

Any rebound is likely to face selling at the 20-day EMA ($0.43) and again at the 50-day simple moving average (SMA) ($0.45). The bulls will have to clear this resistance to indicate the start of a possible sustained recovery. The pair could then rally to the downtrend line.

Instead, if the price breaks below the support at $0.40, it will signal the resumption of the downtrend. The ADA/USDT pair could then decline to the strong support at $0.33 where buying is likely to emerge.

Solana (SOL) has been oscillating between $31.65 and $35.50 for the past few days. The flattish moving averages and the RSI just below the midpoint suggest a balance between supply and demand.

The first sign of strength will be a break and close above the overhead resistance at $35.50. If this level is crossed, the SOL/USDT pair could attempt a rally to $39. The previous recovery had stalled at this level; hence, the bears will again try to defend this level aggressively.

On the downside, the zone between $31.65 and $30 is likely to attract strong buying by the bulls. If bears want to keep control, they will have to sink the price below $30. That could extend the decline to the next support at $26.

The selling resumed on Oct. 10 and the bears will now attempt to sink the price to the support near $0.06. Buyers had successfully defended this support on Sept. 19 and again on Sept. 21; hence, the bulls are likely to buy the dip to this level with vigor.

If the price rebounds off the current level or the support, the bulls will try to push the DOGE/USDT pair to the overhead resistance at $0.07. The next major trending move could begin on a break above $0.07 or below $0.05.

Related: Bitcoin traders expect sharp volatility, here’s how to profit from it

Polkadot (DOT) has been consolidating between $6 and $6.64 for the past few days. The bears are trying to further cement their advantage by not allowing the price to rise above the 20-day EMA ($6.46).

If the price continues lower and breaks below $6.25, the DOT/USDT pair could retest the crucial support at $6. If this level cracks, the pair could start the next leg of the downtrend. The pair could then slide to $5.36.

If bulls want to negate this bearish view, they will have to quickly push the price above the resistance zone between $6.64 and the 50-day SMA ($6.85). If they succeed, the pair could pick up speed and rally toward the next resistance at $8.

Buyers will have to push and sustain the price above the downtrend line to indicate a potential change in the short-term trend. The MATIC/USDT pair could then attempt a rally to $0.94 where it may again encounter selling by the bears.

Alternatively, if the price turns down from the current level and breaks below the moving averages, it could tilt the short-term advantage in favor of the bears. The pair could then decline to $0.75 where buying is likely to emerge.

The SHIB/USDT pair has strong support in the zone between $0.000011 and $0.000010. If the price rebounds off this zone, the bulls will again try to thrust the pair above the moving averages.

The bears may find it difficult to sink the price below the psychological support at $0.000010 but if they manage to do that, the pair could decline toward $0.000007.