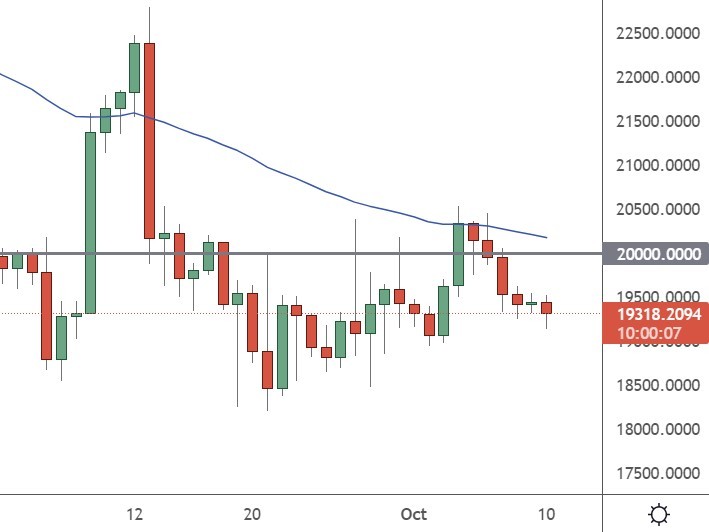 The Bitcoin price was around 1.5% higher this week but the coin failed to take control of the $20,000 level. That could spell danger for the bulls as this was the 2017 high and could lead to further losses.

BTC was lower after stocks markets and commodities surrendered a recent rally due to better-than-expected U.S. jobs numbers.

The latest NFP employment report halted recent speculation that a pivot could be coming from the Federal Reserve on its aggressive rate hike strategy. Traders now expect a 75-basis point hike, with some even talking of 1%. This week will be vital with the FOMC meeting minutes on Wednesday, being followed by inflation numbers on Thursday.

An investment report from Bank of America said that the central bank was not done yet.

Clients have asked if we foresee an imminent shift in stance from the Fed … We think these concerns are misplaced and that the Fed’s job is still far from over. The Fed will keep hiking until the labor market cracks. To us, this means the Fed is confident that payrolls growth has reached an inflection point and unemployment is on an upward trajectory.

The other big news was the hack of a Binance bridge which saw $570m worth of BNB stolen. Bitcoin is still struggling with the negative sentiment of the Terra stablecoin collapse, and the decentralized finance (DeFi).

The latest Binance problems will reverberate around the market and keep institutional investors at bay. Meanwhile, BTC is in trouble if the U.S. sees higher inflation this week.

That Binance hack cost the exchange’s native token around 2.50% this week. The loss was contained as the company was able to limit the damage.

Cryptocurrency bridges are susceptible to hacks because they are connecting two different blockchains and are operating outside of the exchange’s firewalls.

“An exploit on a cross-chain bridge, BSC Token Hub, resulted in extra BNB. We have asked all validators to temporarily suspend BSC,” said Changpeng Zhao, Binance’s CEO, in a tweet Thursday evening.

“The issue is contained now. Your funds are safe. We apologize for the inconvenience and will provide further updates accordingly.”

Another big hack this year was the $625m breach of the Ronin Network in March 2022, which supports the Axie Infinity gaming platform. Hackers took a haul of Ethereum and the USDC stablecoin. U.S. officials blamed a North Korean state-backed group for the theft. Binance was able to recover $5.8 million of the stolen funds and U.S. authorities took back $30 million.

The BNB price is looking like it could test the $260 level and a weaker BTC could force that.

Casper led the way with a 26% gain this week as the coin moved into the top 100 coins by market capitalization.

The Casper Network is a decentralized layer one Proof-of-Stake blockchain built off the Casper CBC specification. Casper is designed to accelerate enterprise and developer adoption of blockchain technology today and evolve to meet the needs of the future.

Over the past 18 months, we have seen tremendous growth of the network, including, as of today, 85,000+ Casper accounts, 18,400+ delegators, 200+ connected nodes, and 540,000+ native token transfers. Currently, approximately 74% of all CSPR tokens are staked and bonded to the network, providing notable security to the platform.

The rally in CSPR this week was due to a change in reporting of circulating coins, which now means 80% of tokens are listed as bonded to the network. The change also adds a small deflationary aspect to previous forecasts. Prominent crypto investor Tim Draper previously said of the project:

The team at CasperLabs has built an essential blockchain platform for real-world applications without sacrificing the essential components of usability, cost, decentralization, or security.

CSPR saw its price rally from $0.03 to almost $0.038 over the last week and that has some resistance for a potential breakout.

The FTX exchange has announced a partnership with VISA to launch crypto debit cards in 40 countries by the end of the year.

These cards will be rolled out with a particular focus on the Latin American, Europe, and Asia markets. The latest partnership is significant for FTX because it came during the bear market, which saw the downfall of companies, such as Voyager, Terra, and Celsius. The founder of FTX, Sam Bankman-Fried, was active in bankrolling struggling companies and that led to Fortune asking if he was the J.P. Morgan of crypto.

That financial stability would have been noted by VISA and the company’s CFO Vasant Prabhu, said:

Even though values have come down there’s still steady interest in crypto. We don’t have a position as a company on what the value of cryptocurrency should be, or whether it’s a good thing in the long run — as long as people have things they want to buy, we want to facilitate it.

The price of FTT has found support at the $23.00 level but in the same manner as BTC and BNB, it lacks a follow-through on the bounce.